Who in their right mind looks forward to cancer treatment? Me. I need a break. I can’t physically find the time to fit everything in, and the idea of lying in a hospital bed waiting to get my cancerous bap sliced open and stuffed with silicone, saline or pig fat is suddenly not without appeal. I’ve come a long way in a few weeks – before, the idea threw me into a blind panic, but I’m so tired, and so ready to accept offers of babysits, dog walks, and help around the house, that I give up. I’ll trade anything – even my left breast – for a good night’s sleep and some time off work and away from the boys, who are in the throes of grief for the third year running. They’re sapping every last scrap of energy I have, and testing my patience to its limits. I adore them, and sympathise, but fuck – it’s hard.

It was all planned quite nicely. As nicely as planning cancer treatment can be, anyway. A few months ago, very soon after my husband had died but before my diagnosis, the boys and I had booked to go to Center Parcs on WAY – Widowed and Young’s annual holiday, as I thought it would be useful for us all to get to know some other bereaved young families. After discussions with the surgeon, we agreed that the boys’ need to meet other like-minded children was probably greater than the risk of postponing the surgery for a couple more weeks. We rescheduled the operation for mid-November – much later than we’d wanted, but the earliest they could find two slots, three weeks apart, for the type of surgery I’m having – and were instructed to go away, relax, and enjoy ourselves. But I hated almost every minute of it.

It wasn’t because of the charity itself, or the lovely, like-minded people I met there, who had similar tales of missing their spouses and a reassuringly heavy obsession with wine. It wasn’t the bicycles or water slides (which my husband would have loved) or the activities on offer – all organised well. It wasn’t the fact that I’d walked into the tail-end of the WAY Hallowe’en party with my wonderful villa mate (whose husband had dropped dead from a cardiac arrest the year before) as the DJ played “Jar of Hearts.” (We wondered if “Stayin’ Alive” or “Living in a Box” had made it onto the playlist earlier.) It wasn’t just that my children had, over the last few weeks, begun to become an angry pair of little shits, petrified of losing me as well as their beloved Daddy, and increasingly more furious with me every time I dared to cry, or to mention how much I missed him. I hated the WAY weekend, simply because it was just too soon for me to accept that I’m a widow.

As we became lost in the stupid bastard forest on our way to some ridiculously bereavement-inappropriate shooting game, I lost it. Completely. The smug twatting non-bereaved families of four, with their little trailers and flags and polka dotted Joules wellies who walked along holding hands as I raced past on my bicycle, screaming at my children that a fucking mastectomy would have been more fun after all, may well have been somewhat bemused, but I couldn’t have given less of a shit if I’d tried. They had what I’d had. They had a happy family, and I didn’t any more. They were probably the sort of people who’d try to helpfully say that I’d “get there eventually,” wherever the fuck “there” is. Where is it? I was there. I had it. All of it. And now I don’t. So, fuck you, and your stupidly jolly chunky knitwear. Just fuck the fuck off.

My husband should have been there. Here. With us. At Center Parcs, or wherever. We shouldn’t have been there just so we could meet other widows and widowers, and identify people who were “just like us” by their trademark blue WAY hoodies. As a family of four, we used to stay in five star hotels in exotic locations and meet people “just like us,” but suddenly a glorified swimming baths in a wood outside Nottingham was where we belonged instead. Had we been there as a family, we’d have loved it, I’m sure. And we should have been there as a family. A whole family. Unfortunately, I didn’t meet anyone as newly qualified into widowhood as me, and found it difficult to see old friends laughing together – people who’d lost their partners years ago, who had begun to rebuild. People who talked about being widowed the way my friends and I might talk about giving birth – never forgetting the life-altering magnitude of the situation, but perhaps more able to discuss it freely without being automatically wrenched straight back into the searing pain of it all. I didn’t resent them – I just couldn’t ever imagine being ready to move on, and these Merry Widows seemed as alien to me as the non-bereaved Chunky Knit Brigade on the outside, playing happy families in their identical little boxes in the woods, wondering what all the blue hoodies were in aid of. A new friend of mine had been asked by a Perfect Family what WAY stood for. She explained, and the inquirers shuffled and turned away.

The veteran WAYers were still widowed, and (mostly) still young, but in a different place from me. Not necessarily a good place – just different. No doubt, they’ll have felt like I did when they first came – in fact, a few people (who picked me up from the floor and wiped away my tears on many occasions over the course of the weekend) said the first time is always awful, and begged me to come back and try again next year. I suppose it’s that slow and horrible acceptance that you’re part of a club that nobody wants to join, and perhaps I’m just not ready to admit that I’m a member yet. For so many, the earth on their partner’s grave had settled, and had given them a more solid foundation upon which to start building new friendships and memories, but my husband’s memory is still so fresh that my heart sinks into the earth every time I think of what we’ve lost. For many old hands, that annual trip to Center Parcs has become an event to treasure, not to dread, and I hope that next year, we’ll have the same positive experience. Maybe Widowed and Young won’t be for me until I really start to accept that I’m widowed. For now, I’m still married. It’s just that my husband isn’t alive any more. 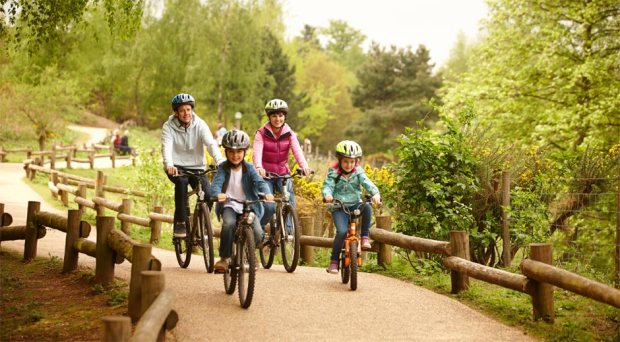 Happy fucking nuclear families, totally unaware of how lucky they are. Copyright centerparcs.co.uk