I walked into the funny little side room where they’d ushered my friend and me, with the inevitable flowery wallpaper border in an awkward shade of peach, and the strategically placed box of tissues. Different hospital, but the same sort of set-up as it had been last year when they told my husband he was dying. They’re all as cheerless as each other, these rooms. The fact that someone’s tried to jolly them up with imitation flowers makes them all the more depressing, but that’s not the fault of the two ladies who were sitting there in their lanyards, smiling weakly – they’re healthcare professionals, not interior designers, for fuck’s sake. I wondered why there really needed to be two of them for something so routine.

I didn’t know if I should start the conversation with a general grumble about what a waste of NHS resources it is to bring in every bloody patient to discuss their results when a quick chat on the phone should have been enough to say that everything’s fine, but I thought I’d leave that bit for afterwards. I shook my head and apologised for wasting their time, but admitted to being just a little bit paranoid because my husband had died four months ago from cancer. I haven’t actually really accepted that he even had cancer, let alone died from it, I said. Silly, really, but it’s always best to get stuff checked out, I suppose. The pressure’s on to survive, because without me, our kids don’t have anyone left.

Sit down, they said.

So, to backtrack, my husband is dead, our kids are soon starting high school, I’m trying to single-handedly build an empire with the remaining crumbs of our once-thriving business, cook meals, walk the sodding dog, drive the kids to footy, drama and youth club, and we’re about to go on a summer holiday where we finally – for once – forget about cancer (but never Dad,) and start building a new life again, just the three of us.

I’m so excited about this holiday that yesterday I even splashed out on four new bikinis. Unheard of. I’ve had the same three bikinis for the last ten years.

Nobody in my family has ever had cancer, I told the boys the other day when the subject came up again. They’ve been worried for a while that they’ll somehow lose me, too. I don’t speed – ever, I told them. I don’t take unnecessary risks any more. I don’t walk down dark alleyways at night. I drink more wine than I probably ought to, but that’s about it. Who doesn’t? But I’m not going to die, lads. Don’t worry. I’m in rude bloody health, me.

It was the school holidays and I had nobody to watch the boys, so I dragged them along to my appointment and lied and told them I had to go in for a routine test that all ladies over 35 have to have, just to keep our boobies safe, and grinned and smiled and laughed through gritted teeth behind the curtain as they played on their iPads and I had six chunks of my left tit smeared into a Petri dish. Dad’s family is riddled with cancer, I said, but my side – no way. I didn’t want to worry them, or myself. I just knew I had to put my mind at rest and hear that these silly little lumps were as insignificant as I’d imagined.

But they’re not. My friend held my hand as my world fell apart again, and the nice ladies in lanyards told me that I have two tumours in my left breast, which is pretty bloody high achieving of me, actually. They’re still fairly small, and it seems that I did the right thing to alert my GP friend who turned up for a bottle of wine and a grope of my tits just weeks after my husband’s funeral. She wasn’t too concerned, but as a matter of course said she’d send me down to the Breast Unit. I didn’t even know there was such a place. My hubby would have liked to have had the opportunity to accompany me there, I thought.

I shook my head when the nurse asked if I qualified for free prescriptions, and she smiled and said “you do now,” while thrusting a form into my hand with the box I am a cancer patient already ticked.

I have leaflets, and scan appointments, and two booklets with cartoon superheroes fighting bad cartoon cancer cells to give to the boys (one each, so they don’t need to squabble over them.) I don’t yet completely know what the treatment will be. But I do know that I’ll need a mastectomy, and with that it’s curable. I think the timing is shit and my heart is ripped to shreds for our growing boys who have known nothing but a parent with cancer since they were 8 years old and need a fucking break. But, I also know that my husband was given a 16% chance of surviving beyond two years. Conversely, I’ve got about a 16% chance of dying, as long as we act fairly quickly. He fought for two years and several rounds of chemo to stave the fucker off. I know, therefore, that I am lucky, that this is but a brief blip, and that I owe it to him to take those odds, to use them to my advantage, and to not complain. Not too much, anyway. Two years ago, we would have given anything at all for the odds that I find myself blessed with, and it could be so much worse for me right now. Still, so much of me wishes that my husband could be here to hold my hand through this, as I held his, and another part of me is glad that he doesn’t have to, because the news would have crucified him anyway, not least because he’d always admired what he described as my cracking set of baps. It’s always harder for the carer, he said. Well, that’s OK, because mine’s already dead.

This coming holiday, I’m going to wear the fuck out of those four bikinis.  Soon, I’ll have half the number of buoyancy aids that I had before, but I’m damn well going to keep afloat. I’m all that our boys have left to cling on to. 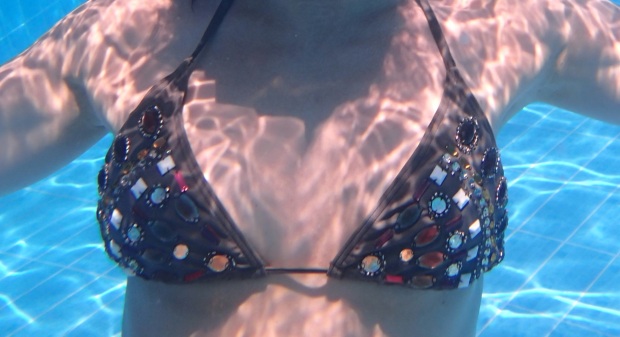 Small, but perfectly formed. And rising back to the surface… eventually.

I wrote this blog on 12th August 2016, the day I was diagnosed with breast cancer, and almost four months after my husband had died from oesophageal cancer. Now that we’re back from our holiday and I’ve told the boys, I can publish this, as they now know the full situation. They are, of course, upset, but understand that it’s completely curable, that my treatment will be nowhere near as gruelling or as long as my husband’s, and that I still plan to keep working, just as he did. With the help of some truly wonderful friends and family who will drag us over these next few hurdles, we remain very lucky indeed.